We’ve had a remarkably long fall–which I know has a few people feeling uneasy, but I will admit: I’ve relished it. I know that nature doesn’t pay me any heed, but I not-so-secretly believe that this fall is my reward for the two years I gave to Alaska, where summer is all too short and fall is even shorter.

Yet, even with the length of this season, my internal clock has been hounding me to get out and put the garden to bed.

YOU KNOW! Hunker down for winter.

I found it easy to plant bulbs for next spring and cut back the hops, already done for the season. I got excited about mulch this year. Does that mean I am getting dull?

But, every time I went out to do the other thing–the killing thing–I found myself standing in the bath of light that comes with the autumn sun. I felt ablaze like the leaves of our locust tree; illuminated.

This autumn sun is more fitful than brazen, tossing and turning, scattering its treasure this way and that. And the thing is, I don’t want to do anything to squander the light, because all too soon, that sun is going to roll over and steal the covers. Gold blanket gone. Left with nothing but a thin white sheet.

So, that was my first excuse. I couldn’t bring myself to alter anything that swallowed that light. The still ripening sun golds, clustered on their vine, promised me a string of singular moments to carry me into winter, marked by smooth flesh on my tongue and sweet, sweet sugar to follow. The dahlias expanded–more vivid than my sister’s spirograph drawings–color bleeding from yellow to red daily, even as the nights got colder (and maybe because they did). 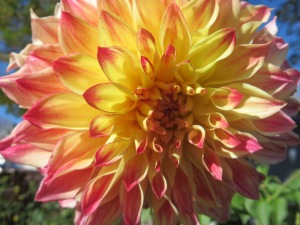 But the other excuse came from my gut. It kept saying that my internal clock was off, because every time I stood in the garden, poised to tear something out, it told me, “No!”

It’s true, I’ve always had trouble killing stuff, even if it’s for the benefit of other stuff (like the 5 million sunflowers that come up every spring that I have to thin out so the remaining 2,000 can flourish). But this was about more than that and I found myself letting the internal battle between the clock and the gut play out, every day–I found this pressure to sort it out.

Four days ago, I wandered out there again and I decided that it just wasn’t time, yet. That the season would decide on the time.

Food was still growing–and nourishing us.

I love beauty and I love bringing it into the world for those around me. 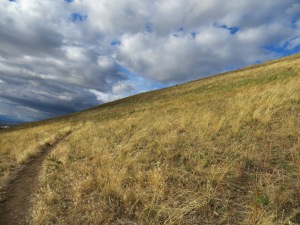 It goes against my own nature to take beauty away.

In this world, where Nigerian girls fear a fate worse than death,

where men are murdered while guarding the dead,

where children wield guns because they feel no power

or they’ve come untethered from love

–In this world where we can’t seem to protect that which redeems us,

I wanted one more day of this beauty.

Who am I to take it away?

I can’t change so many things,

but I can try to be part of the balance to dismay. I can seek a path to equilibrium.

The killing frost came two nights later and my dahlia bulbs are drying on my living room shelf.

Sometimes my gut knows things before I do.